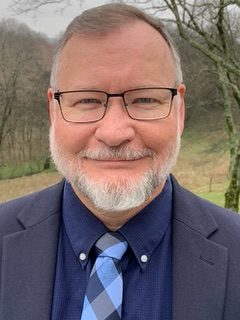 Kevin V. Rutherford was born in Zambia, Africa to missionary parents Rod and Brenda Rutherford.  Kevin began preaching sermons for the church at the age of twelve while his parents were actively involved in evangelism in Tasmania, Australia.  He graduated from David Lipscomb University and the Memphis School of Preaching before devoting his full time to the work of evangelism and edification.  Kevin Rutherford preached for thirty-one years after his graduation from MSOP before being asked to consider a position on the faculty.  During that thirty-one-year period Kevin preached for three congregations.

Kevin Rutherford has taught preacher training courses for various congregations, has been a guest speaker for the school of preaching in Zambia, and has taught for the North Carolina School of Biblical Studies.  He has also been the co-founder and co-director of two youth camps and a family camp.  His work with youth camps has spanned a period of about twenty-five years.  In addition, he co-founded, and administered a home-school co-op, while also teaching speech and Bible for the co-op.

Kevin has been blessed to grow up in the mission field and to participate in various mission campaigns in Africa, Europe, Australia, and the United States.

Family has been one of the greatest gifts God has given Kevin.  His wife and three adult children are actively involved in the Lord’s church to the glory and praise of God.  Additionally, Kevin has been given the tremendous blessing of knowing his granddaughter is being raised to know the Lord.

Kevin’s father graduated from the Memphis School of Preaching and later served as an instructor in the school.  Kevin’s brother and Kevin’s son are also graduates of MSOP.

Everything good in Kevin’s life is a gift from God to whom deserves all the glory and praise.